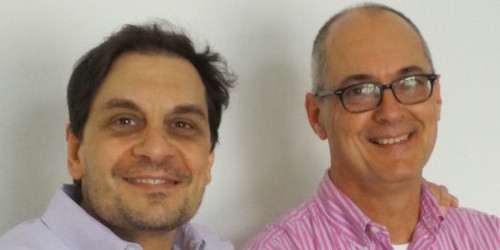 “I started Propel publishing with artist manager Michael McDonald when I came to Nashville about eight years ago,” says Robinson. “It got rolled into Big Deal. First person I hired was Sr. Dir. Creative, Greg Gallo and then almost immediately Dale Bobo came on board as Sr. VP with the understanding we’d run this office together.”

“Pete and I had only met once or twice before Kenny put us together,” says Bobo, “but our personalities and publisher styles turned out to be a great fit.”

Before moving to Nashville, Robinson, was born and raised in New York and came from a rock background. He’d done A&R at Giant, RCA—where he was involved in signing the Dave Mathews Band— and then Epic Records. He also worked as a studio owner.

Bobo’s Nashville publisher roots run deep. He began in the tape copy room at Warner/Chappell then rose through the ranks to head the office. Later he served as Exec. VP for Chrysalis Music Nashville. In addition, Bobo has served as Chairman of the Copyright Society of the South, is a Leadership Music alum and a NARAS member.

“Dale and I come from different backgrounds,” adds Robinson, “but we’re similar in many ways which is why it works so well for us.”

Big Deal Music is one of a cadre of newly minted, mid-size operations—large enough to have offices in several cities, but still able to move quickly and take advantage of opportunities as they arise.

NEKST caught the duo at their new Berry Hill offices. Big Deal has scored a number of recent chart successes (see sidebar) and the mood was light. Between the humorous one liners flying around and engaged tangent conversations, it’s clear these dedicated publishers aren’t just working hard, they’re having fun, too….

Coming up are some of our conversation high points about starting a new company, signing writers, tricks of the trade, timing and having a good time in the process… 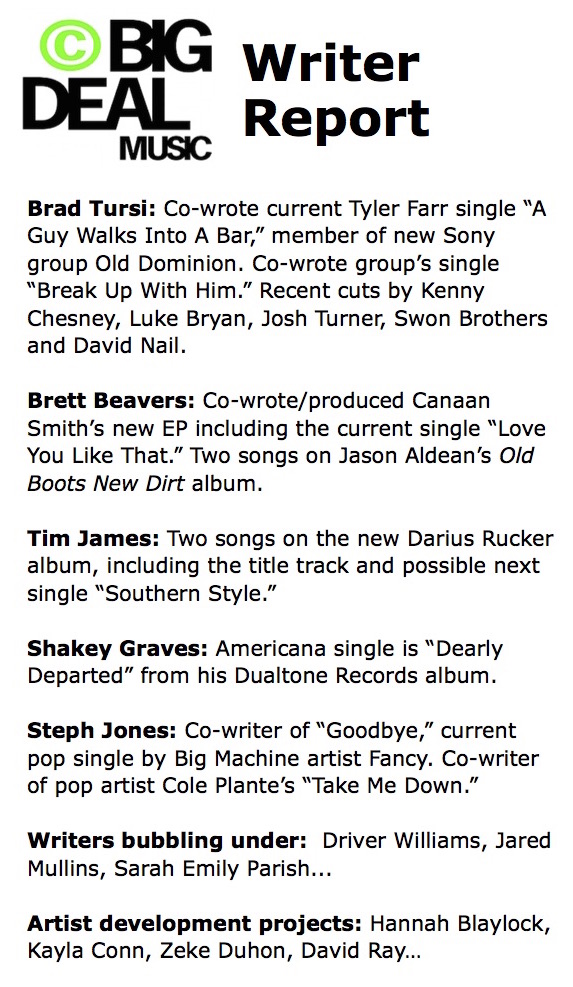 NEKST: Opening a new office must involve a lot of planning?
Pete Robinson: Absolutely, and we always want to be ahead of it before it gets ahead of us. It’s important to us and our writers that the catalog and operation be organized efficiently.
Dale Bobo: Building good systems is easier now than even just a few years ago. For example, we rely heavily on readily available online tools like Dropbox and Google Docs. We’re also adopting publisher cloud software from Songspace. Soon our writers will have it on their phones. It’s especially good for those late hour moments when someone needs something and you don’t want to go to the office to get it. We’re also making sure to grow our personnel in proportion to our roster so we can service the writers in the way they deserve. We just hired a fourth full-timer in the Nashville office—Emily Sniezak.

NEKST: You had offices in the old RCA/Studio A building, but had to move?
Pete Robinson: Well, it seemed that way at first, but then it turned out we probably didn’t have to leave so fast. I was actually in the RCA building for five years. When Greg and Dale arrived we found a larger space on the second floor. Ultimately, it worked out great for everyone because they are going to save the building and studio and we found a perfect new space in Berry Hill.
Dale Bobo: We love Berry Hill. It’s my first time to be located off Music Row so at first it felt a little weird. But everyone knows where it is and there are a lot of other music businesses here. It’s an easy walk to Buddy Cannon’s office, New West is across the street, House of Blues, Blackbird and more are all in the neighborhood. Music Row is undergoing a lot of transition with the building and construction going on. Just driving around can be a challenge. So we’re finding it peaceful and creative over here. Plus, it’s only about 8 minutes away.
Pete Robinson: As a New Yorker who moved to Nashville, the romance of working on Music Row was like a dream. I really loved it. Wrapping my head around the thought of moving off the Row took a minute, but we’ve had a great experience being over here.

NEKST: What are your thoughts and philosophies on building a writer roster?
Dale Bobo: We appreciate passionate writers that are good people. Naturally, they have to be talented and work hard, but Pete and I know the value of working with people who play well together. And we love our writing staff.
Pete Robinson: When seeking out talent it usually kind of happens naturally. There is that instinctual, gut feeling that you just need to work with a person.

NEKST: What’s going on in the song world?
Pete Robinson: Dale and I talk about songs every day, it’s our life. Anytime anyone says to me, “There is no good music any more,” I roll my eyes and think, “Are you out of your mind?” I’m continually astonished how these great Nashville songwriters come up with creative new ideas. We can’t wait to hear the new songs as they arrive from our writers.
Dale Bobo: The music business has always created trends that change and evolve. So we counsel our writers to be inspiring, cool and hopefully not too out of the box for being on the radio. Every once in a while I hear a song with a unique new twist like “A Guy Walks Into A Bar,” with Tyler Farr from our writer Brad Tursi. I couldn’t believe I hadn’t heard that title before.

NEKST: What are today’s biggest challenges for publishers?
Dale Bobo: They’re the same challenges that have existed for a long time, like keeping your writers and yourself inspired. Publishers are continually looking for new writer collaborations and writers have to pitch in as well. But sometimes you take a step back. For example, lately Brett Beavers has been writing some great solo songs. Brad Tursi and some of our other writers do some solo writes, too. We encourage it because it’s a way of keeping your creative center strong. I don’t think the public gives a rip about whether a song is a co-write or not, but for publishers it’s like, “Wow, you did that all yourself!”
Pete Robinson: Developing our writers and finding opportunities for them is our main task, but we’re always looking for new talent, too.

NEKST: Tricks of the trade?
Pete Robinson: I’m not sure it’s about special tricks. We just continue on the path, everyone works hard and we try to set up great collaborations. At the core it hasn’t changed much, I mean there are guys and gals upstairs working in our writer rooms right now, strumming guitars.
Dale Bobo: We do learn a new technology trick every once in a while, but publishing is remarkably the same in many ways. You still have a producer, an A&R guy and an artist looking for something amazing and wanting help to find it. Thirty years ago someone might have asked, “Do you use Dolby on your cassettes?” But Dolby never made any difference about whether it was a good song or not.

NEKST: Are you surprised to see such a small group of writers controlling the charts this year?
Pete Robinson: They are all great writers in that group and deserve their success. Plus that seems to be typical of all formats—pop, country or R&B.
Dale Bobo: In Nashville there’s always been a group of five or so writers that seems to get on a lot of records. Every publisher’s goal is to try and get some of their writers into that circle. To that point, we frequently forward the NEKST songwriter chart to our writers and I get the occasional email, saying, “I want to get on this thing,” it stokes the competitive fires a bit.

NEKST: Because Big Deal has L.A. and New York offices, is Nashville for country only?
Dale Bobo: Obviously we want to do awesomely on the country chart. But format boundaries don’t exist in the same way they did years ago, especially for younger listeners. Writers are getting pretty comfortable moving from style to style and mashing them up, too. It’s healthy. Why enforce boundaries that are somewhat artificial to begin with?
Pete Robinson: Country music is the main focus in this office, but we love to promote collaborations with writers from our other offices, too.

NEKST: Is this a good time to start a publishing company?
Pete Robinson: I’m crazy bullish. It takes a significant amount of money to launch a mid-size operation with three offices like Big Deal. But more than money it takes commitment to build success. Kenny has been an incredible leader and created a great culture. He had this great vision about putting Dale and I together. The chemistry inspires us and makes us want to come to work everyday. We laugh and work a lot. I love it when the writers are creating upstairs and we are down here pitching songs and Dale comes into my office excited about a song, or we share a pitch idea.
Dale Bobo: This is my third time working with Big Deal President Kenny MacPherson. He has this awesome knack of putting people together who are optimistic about the business and fired up. You can worry about the economy or what’s happening in the music business at any given point in time, but launching a company is really about bringing together a motivated group of people. It’s a gift to work with the great staff and writers we have in this company. Pete and I spend a lot of time discussing music and go deep about what’s going on. Coming from different places continually gives us the chance to play great games of six degrees and between us both we’re usually only a step or two away from anyone.