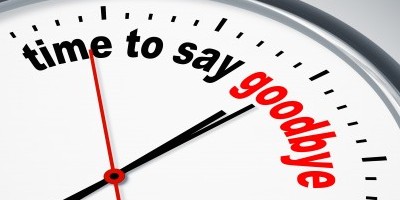 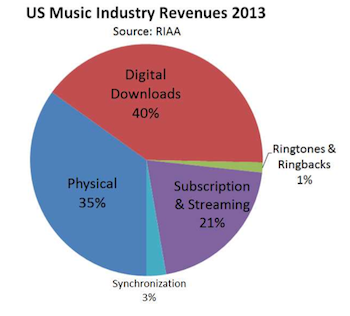 The Recording Industry Association of America or RIAA, has released its annual 2013 Year-End Industry Shipment and Revenue Statistics. This trade organization, created in 1952, “supports and promotes the creative and financial vitality of the major music companies.” It’s Gold and Platinum Awards are a worldwide industry standard.

But like most entertainment industry entities, the advent of digital music has forced a relentless evolution which can be seen in this latest industry accounting report. Originally, the RIAA smartly decided to measure shipments of product to the stores—not actual sales—and base its awards upon those shipments. This was pragmatic in the days before point-of-sale bar code capture. Shipments were far easier and more accurate to track than weekly word-of-mouth, sales per store.

When digital downloads began, the first leg in this table started to wobble because the term “shipments” had no meaning in that new distribution realm. So the RIAA decided to use its own proprietary system to measure and track downloads and essentially patch estimated actual sales to physical shipments and Awards. In the beginning, digital downloads were tiny so it seemed a reasonable fix.

Fast forward a decade or so and in its just released report the RIAA claims that digital product represents 64% of the ENTIRE music sales pie, making the mis-matching of sales and shipments more pronounced. Also another anomaly has been forced into the numbers—Digital Subscription and Streaming. RIAA measures it with “estimated payments to performers and copyright owners” plus by “total subscribers.” Streams also now count toward earning Gold and Platinum honors, but although it’s essential to include this latest distribution channel it further weakens the logic of the original accounting process because the Subscription & Streaming area is also devoid of shipments.

What It Means?
Physical shipments, the foundation of the RIAA Revenue Statistics are quickly becoming obsolete and irrelevant. The venerable trade association needs a partner (or partners) to bolster and redesign this important industry report using more exact data. For example, the Nielsen SoundScan folks already have systems in place that measure actual physical and digital sales data—not shipments— and have made progress in measuring streaming usage as well. This change would place all physical and digital download data (80% of the market place) on equal, real-time, footing.

The RIAA over its history has made lasting industry contributions. Now, to continue that legacy with its annual report, it’s necessary to climb aboard the Big Data train and recognize the era of shipment-based accounting has left the station. That important first step will unify 80% of the data. Then it’s “All aboard, next stop Streamville, the new frontier.”