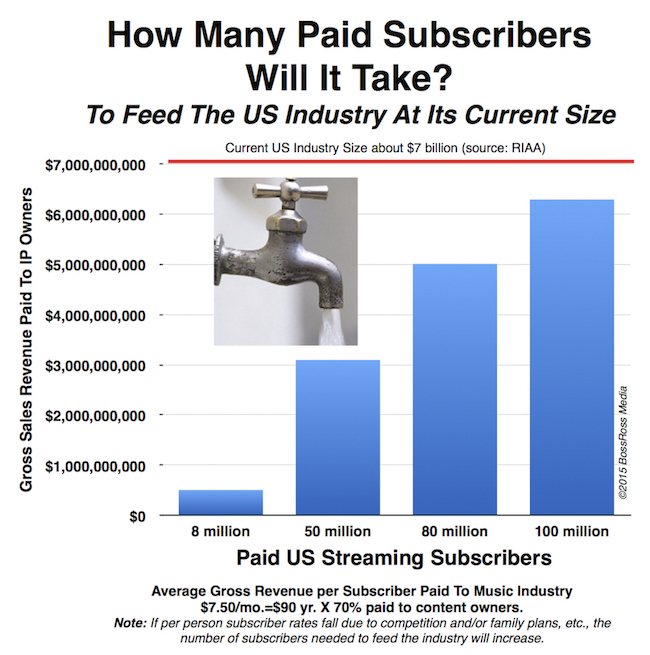 Fact: The status quo sucks for intellectual property owners hoping to be fairly compensated via streaming.

==> It might be hard to pinpoint the exact moment the change occurred, but the digital economy has quietly transformed music from a product into a public good. Please read that again, …a public good. How do we know this happened and what does it mean? Let’s first look at the definition economists use to describe “public goods.”

Public goods are defined as “non-exclusionary.” That is they can be used by everyone, including those who don’t pay because it becomes impossible or at least difficult to prevent people from gaining access to them. Also they are “non-rivalrous” which means one person’s consumption does not reduce a good’s usefulness to others. (Sounds a lot like digital music, doesn’t it?)

Consumers have become comfortable with the value proposition of free music. They’ve learned that the Internet cannot be locked like a Walmart store. As a result, controlling the distribution of music has become virtually impossible for artists and industry. For example, anyone can send a song file or link to thousands of friends with a single click. And who gets paid when that sharing takes place?

Currently there are a modest 9 million paid U.S. streaming on demand subscribers. They pay an average of $7.50 a month and the companies distribute about 70% of that income in royalties. That check comes to approximately $550 million! Nice payday, but not enough to feed a $7 billion industry. To eventually fund today’s U.S. industry at its current level (after physical and digital revenues subside) will likely take 70-100 million paid subscribers (see graph). What if we simply never reach those levels of paid subscribers or competition forces subscription prices lower?

After realizing that the digital economy has transformed music from a product into a public good, the question is, “Can we still find a way to compensate intellectual property owners?”

The answer is yes, using an actuarial model in much the same way that society pays for other public goods like roads and schools. How exactly would that work?

Internet Service Providers (ISPs) like Comcast, AT&T, Verizon and others are the obvious toll booths to collect a small monthly music fee from the almost 300 million U.S. mobile and broadband household Internet accounts. The enormous audience scale means that payments could be little more than a dollar a month per account and still create an annual revenue pool able to fairly compensate songwriters, publishers, artists and labels.