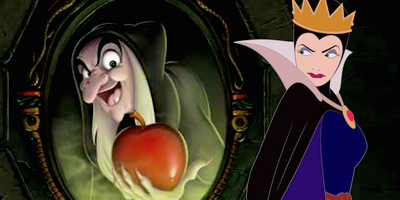 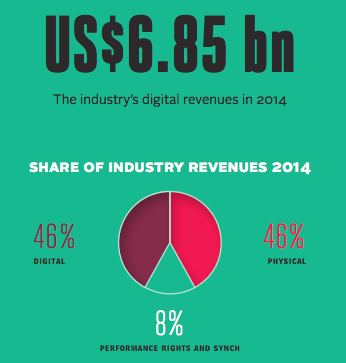 The annual IFPI (International Federation of the Phonographic Industry) DigitalMusic Report 2015, arrived April 14. Unfortunately, this 44-page brochure, jam packed with cutting- edge graphics, descends into a numeric abyss of smoke and mirrors that only marginally adds focus to the industry it portends to serve.

Roger Faxon, who recently joined Pandora’s Board of Directors described the IFPI report as, “Dubious accounting.”

The document opens with a perceptive, if dated, statement from IFPI Chief Executive, Frances Moore,

“…the music industry’s digital revolution continues through new phases driven by the consumer’s desire for access to, rather than ownership of, music.”

Moore adds, “As this edition of IFPI’s Digital Music Report shows, the state of the recording industry is in many ways cause for great optimism .… and the consumer research shows it.” 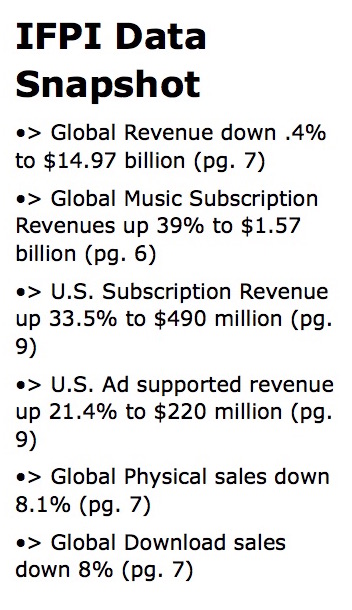 Exactly what the research actually shows is anyone’s guess, since the report relies heavily on percentages and inconsistent metrics while too often obscuring the underlying data they represent. For example, page 9 states, “…the U.S. market increased in value by 2.1 percent. Digital revenues topped $3.5 billion in 2014 and now account for nearly three-quarters of the recorded music market (71%).” Blatantly missing is the size of the total U.S. market. After doing the math myself, I assume it is $4.9 billion. But why is such an important metric missing from the text? (RIAA which has different methodology estimates the U.S. business at $6.97 billion for 2014.) Unfortunately, there are many examples such as the graphs on pages 8, 9, 14 and 19 where the report offers glowing percentage comparisons without providing the numbers that might give the data more context.

RIAA at least issues a solid report. One can argue with its methodology, but its numbers are clearly stated. SoundScan is another example of industry data that, although restricted to physical and digital downloads, offers sharp marketplace outlines. Let’s move forward. 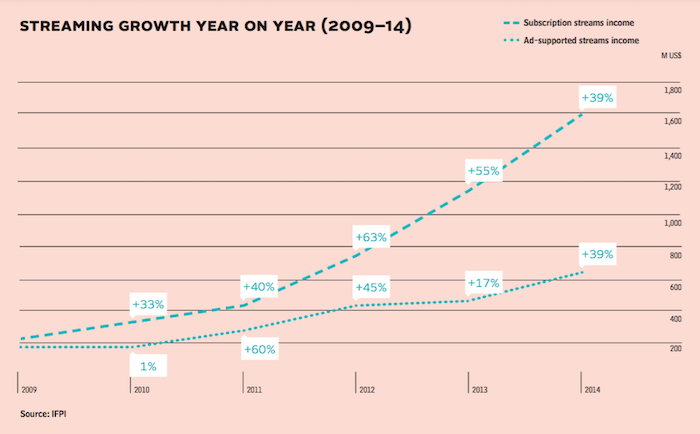 Honesty Is The Best Policy
The core industry growth data is contained on pages 6-9 and begins with digital revenues. According to the report, global digital revenues increased 6.9% to total $6.85 billion. However, “Digital Revenues” is not fully defined until page 8 where one finds in the small print that this year’s methodology has been amended to include Sound Exchange distributions not counted in previous years. (Want to know how much of the 6.9% increase is due to the new methodology? Go get your calculator.) 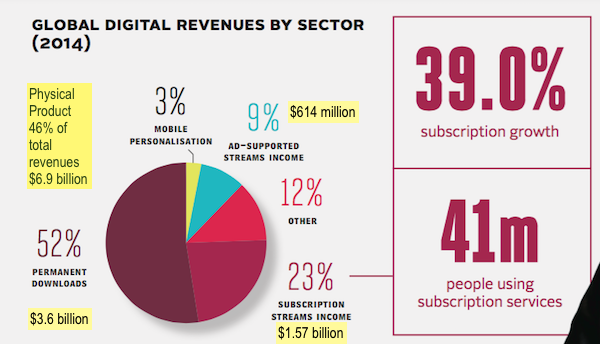 Subscription Revenue
Moore’s opening remarks about access vs. ownership are bolstered by the last paragraph on page 6: “An estimated 41 million people worldwide now pay for a music subscription service—up from 28 million in 2013…” Also noted in some rare candor; music subscription revenues are now 23% of digital revenues globally, rising 39% to $1.57 billion.

A pie chart (above) breaks down Global Digital Revenues By Sector and percentage (page 7). I’d like to know what these pie slices represent in actual dollars, but that info isn’t readily offered. However, since the entire pie is said to be 46% of the overall market and that market was said to be $14.97 billion, I calculated some of the totals myself and have added them to the graph in yellow.

Numbers take time to study and evaluate, while simply saying subscription revenues grew 39% makes an easy TV soundbite. That’s a lot right? Well, not when paid revenues equal $1.57 billion and ad supported a mere $614 million for the entire world! That is why Taylor Swift is unwilling to offer her music for ad-supported streaming. Spotify now claims 17.5 million paid subscribers and 49 million ad-supported users worldwide. $614 million is an agonizingly small amount when one considers it is being divided across the streams created by over 49 million users.

To be fair, there is a massive effort contained within the pages of the IFPI Digital Music Report. In addition to the aforementioned data there are breakdowns by country, artist rankings, plus worthwhile trend and marketing discussions.

Edgar Berger, Sony Music Entertainment Chairman & CEO was present during a London event when the IFPI report was released. He was quoted as saying, “The music industry is managing three transitions at the same time: from physical to digital; PC to mobile; and download to streaming.” Berger succinctly sums the swirling challenges. Now IFPI must answer its own challenge. Is this report a publicity tactic or valid research? Does the industry want a reflection of marketplace clarity, or simply to call out, “mirror mirror on the wall who’s the fairest of them all?”