The Streaming Cure For Terrestrial Salads 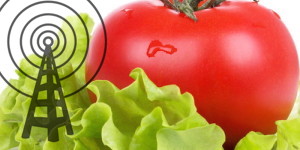 The Streaming Cure For Terrestrial Salads

by Charles Alexander
Recently a country music radio consultant created a firestorm by declaring that female singers are the “tomatoes in the salad” of country radio. He further went on to say, “If you want to make country radio ratings, take females out.” Attitudes and biases such as these highlight fundamental problems with terrestrial country radio. Fortunately, as streaming & related digital technologies become more mainstream, they should alleviate the impact of these issues and cure some of these imbalances.

Streaming vs. Radio Playlists
Not unlike radio, there are streaming programmers who create playlists around music they like. Some of these programmers work for Spotify. Others such such as Joe Vuong and Songpickr are independent tastemakers who have a cult-like following on the platform. Their followers may number in the hundreds of thousands or in some cases over a million or more listeners.

We placed music from Keeley Valentino, an artist we manage, on the “Your Favorite Coffeehouse” playlist which claims 1.2 million followers. Her song, “Nashville” generated over 2 million plays in the first 4-5 months of this year and has given us some traction.

Mainstream radio playlists however still remain mostly the exclusive territory of major labels or large independents. They not only have the financial resources to promote, but also have the required leverage in order to get their artists and songs played. Most of those playlists are determined by radio consultants and committees at corporations such as Clear Channel and Cumulus Media. Although individual DJs might have some input into what gets played on the air, few have final say.

Audience Comparisons
Terrestrial radio and streaming service audiences are treated vastly different. Terrestrial radio is dependent on advertisers for support and therefore caters to brands looking to market products to it’s specific audience demographic. A station can’t afford to have listeners tuning it out and its playlists reflect that need. As observed by SiriusXM’s John Marks, “..the [Portable] People Meter ratings methodology [of terrestrial radio] punishes unfamiliar music, by and large. Radio used to be an active medium, but now it’s more passive.”

Streaming is by nature more active because it understands specific users based upon their preferences and age group. It is possible to objectively determine in what demographic a specific song or artist is trending and then create a profile or marketing persona of that particular fan. Personas can then be used to target other similar fans so as to increase affinity or adoption for a specific artist or piece of music.

As a general rule, millennials are streaming’s primary audience. They are in the highly-valued 18-34 demographic and make up almost 25% of the US population and 2.5 billion of the world’s population.

If we look at the numbers for the Top 3 songs for male and female country artists on Spotify we find the following: 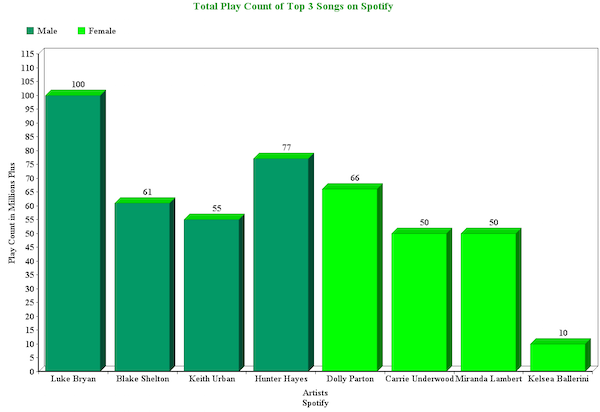 Even though male artists have higher numbers, the advantage gap with respect to female artists is not as big as country radio would have you believe. Further, Hunter Hayes has 77+ million spins on his Top 3 songs. He also achieved that benchmark much more rapidly than the other male artists. Warner Music has recognized this trend and is adjusting their marketing plan accordingly. I believe Country Hit Radio is missing a huge opportunity with Hayes. So even male artists suffer from some of the same shortsightedness plaguing women at country radio.

These numbers were obtained the night prior to Ms. Underwood winning the most awards at the fan nominated 2015 CMT Awards show. She was also the most nominated artist of the awards show. This isn’t scientific, of course. But it would seem that the Spotify data is inline with fan popularity and recognition.
Kelsea Ballerini just had the 1st No. 1 female debut single at country radio since Carrie Underwood in 2006. She only has 10 million plays on Spotify. But they also occurred in a relatively shorter time period as compared to the other artists. (Note: Kelsea Ballerini’s numbers were obtained this week)

The State of Country Radio
This all leads us back to Keith Hill, the country music radio consultant. It is time to disrupt and disentangle radio’s stranglehold on the careers of female country artists. And streaming is just the prescription to cure the ailment. The launch of Apple Music should bring even more listeners to streaming as a music consumption option. The automobile dashboard revolution will also encourage most of us to migrate from terrestrial radio to streaming and satellite services. What’s more, I believe the country format will benefit greatly from these changes. Here’s to the tomatoes…

Charles Alexander is a digital strategist, artist manager and singer/songwriter. He is the CEO/Founder of Outside The Box Music, an artist management & digital services company. He helps artists, musicians & songwriters amplify their online presence.